"Three on a Match," or Ladies and the Tramp 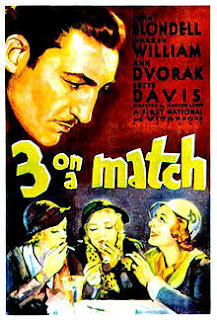 The 1932 film "Three on a Match" traces the lives of three women friends from their school days to adulthood. It also offers an interesting look at three actresses on different career trajectories, with the one in the least showy role going on to become the queen of the Warner Bros. lot into the early 1950s.

The story is by Kubec Glasmon and John Bright, the same duo who gave us "The Public Enemy," and the movie begins in the same territory -- a working-class urban neighborhood right around the end of World War I. This time around, however, the plot centers on three girls -- Mary, Vivian and Ruth. Ruth is the goody-goody kid, Vivian hangs upside down on the swings to let the boys see her bloomers, and Mary is voted most likely to be out back smoking with the boys.

Fast forward thirteen years, and the girls have grown up -- Mary into Joan Blondell, Ruth into Bette Davis and Vivian into Ann Dvorak. Ruth is a responsible office worker, Mary has gone from a stint in reform school to a life as a good-hearted showgirl and Vivian is married to wealthy attorney Robert (Warren William). Ironically, even though she has the most to be thankful for, including a young son, Vivian is the least content:

What Vivian is looking for is a little hotcha, and she gets it in the form of Lyle Talbot as Michael, a smooth gigolo-hood. They meet on a cruise ship, introduced by Mary -- Michael is there seeing off some friends and Vivian is going to Europe with Junior. At least that's her plan until Michael sweeps her off her feet:

The trunk belongs to Vivian. She's getting off in more ways than one. 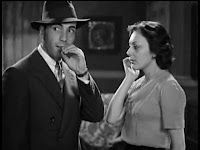 And before you can say "sexually transmitted disease," she and Michael are shacking up, with neglected Junior along for the ride, a towhead in tow. Robert is going crazy trying to track them down, and with Mary's help, Junior and father are reunited. Vivian, on the other hand, is sliding steadily downhill, hanging out with Michael's hood friends (including Humphrey Bogart and Jack LaRue) and developing a taste for nose candy. (In one great moment Bogart wipes his nose dismissively as he refers to her.)

Meanwhile, Mary and Robert are getting cozy, and Ruth has become Junior's nanny. Mary and Robert marry as soon as his divorce from Vivian is final. Vivian and Michael have fallen on hard times, and Michael hatches a plan -- they'll kidnap Junior for ransom from Robert. Vivian is a reluctant accomplice, and when the heat is on, the hoods -- including Bogart, La Rue and Allen Jenkins -- make plans to kill the boy. Dvorak learns of this and in a scene that's still compelling after 80 years, she takes matters into her own hands:

There's a kind of perverse melodramatic beauty in those last scenes, from the jump to Junior's painfully lame acting to the casual tossing of the match. Tramp's dead and all's well!

Davis's performance -- and her character -- are pretty colorless. She was still a couple of years away from her breakthrough role in "Of Human Bondage." Blondell is pretty much playing the same good-hearted dame she would play through the 1960s and as late as 1978, in "Grease." Dvorak has the showiest role here, but that wouldn't last long, thanks to her battles with Warner Bros., her desire for independence and her subsequent move to England.