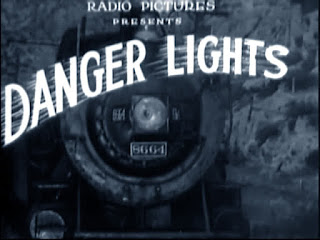 Plotwise, the 1930 film "Danger Lights" is "The Broadway Melody" with locomotives -- a love triangle involving two people who hate to hurt the odd one out. But it also offers interesting location footage of trains and train yards, a glimpse of Jean Arthur early in her sound career, and one of the few talkie film performances of Louis Wolfheim, who died in 1931 of stomach cancer. 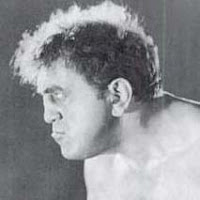 Off camera, Wolfheim had a reputation as a cultivated man -- he attended Cornell University and spoke several languages -- but his stocky, plug-ugly appearance meant a career in tough character roles, including a memorable turn as Stanislaus "Kat" Katczinsky in "All Quiet on the Western Front," made just before this film. Wolfheim's profile wasn't exactly Barrymore-ish -- it looks like two upside-down 7s on top of each other.

Here, Wolfheim is Dan Thorn, a hard-driving railroad yardmaster whose bark is worse than his bite. We know this because that's what everyone is always telling us, and because Dan has opened his home to his disabled railroad buddy Ryan (Frank Sheridan) and daughter Mary (Arthur). Mary is preparing to marry Dan out of obligation, but that changes when Doyle (Robert Armstrong) hits town. He's a tramp who's hitched a ride on a freight, but when Dan finds out he's a former engineer he gives the guy a job. And when Doyle gets a gander at Mary, he makes up his mind to stay:


Oblivious to the attraction between Doyle and Mary, Dan keeps pushing them to spend time together because he's working on the railroad all the livelong day. And when they're walking home across a railroad trestle, Doyle and Mary act on their attraction:


By the time Dan finally finds out what's going on, the couple has made plans to leave town together. But a hitch develops while they're cutting across the rail yard:

Dan is badly injured, because the train in rain hits mainly on the brain.

The only hope is to get him to a Chicago brain specialist within five hours, but the fastest train on record can make it only in seven. A guilt-stricken Doyle takes the throttle, and Dan makes it to the Windy City in record time. To make everything hunky-dory, Dan realizes that he really loves the railroad, not Mary, and he gives the couple his blessing.

Much of "Danger Lights" was filmed in Montana, at the Miles City yards, and director George B. Seitz fills the movie with lots of hard-charging railroad action! Wolheim is a winning presence as Dan, but occasionally he garbles his lines (at one point he says to someone, "How'd you like to have a new man for your suttapacka job?"). And it's always interesting to see Arthur; here she is just starting to demonstrate her familiar screen mannerisms.

Here is a full cast and credits list for "Danger Lights" -- pay no attention to TCM's plot description.