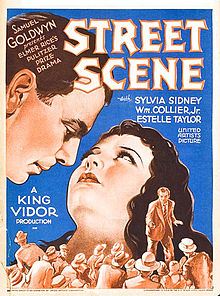 The 1931 film "Street Scene" opens with Alfred Newman's theme music -- music that is so evocative of a city that it was being used as "New York Music" in 20th Century-Fox films twenty years later. And unlike many film scores of the time, it has a sophisticated orchestration -- you hear it and you expect to see a movie from the 1940s instead of one from the early 1930s:

The Hell's Kitchen apartment building at the center of "Street Scene" would today be filled with condominiums selling for hundreds of thousands of dollars. But in 1931 it contains the most diverse group of tenants this side of Ellis Island -- the Kaplans, the Maurrants, the Joneses, the Fiorentinos and the Olsens, to name a few. Within the space of 24 hours, on a hot summer day, they gather on the front stoop to gossip, fight, argue and witness a double murder.

Setting the story on a broiling summer day is a great way to get everyone outside and introduced -- the Maurrants include mother Anna (Estelle Taylor), crabby father Frank (David Landau) and daughter Rose (Sylvia Sidney). Then there are the Joneses, the most vocal member of which is mother Emma (Beulah Bondi), a buttinski, a gossip and a know-nothing with views on poverty and evolution that would place her comfortably within the ranks of today's Republican party. Her son Vincent is an angry ignoramus and her daughter is a floozy. The Kaplans include radical father Abe, schoolteacher daughter Shirley and sensitive Sam (William Collier, Jr.), who's always reading a book and who is sweet on Rose. The Olsens are a Swedish couple with a new baby and the Fiorentinos include an Italian husband and his German wife.

The daily routine -- life as it plays out on the stoop -- revolves around incessant talk about the weather and gossip about the neighbors -- particularly Anna Maurrant, who's having an affair with the guy who collects for the milk each week. Meanwhile, Rose is being pressured into a sexual relationship by her piggish boss, while Sam Kaplan has a hard time working up enough nerve to tell Rose how he feels -- or to counteract the constant catcalls of "Kike" from the bullying Vincent Jones.

King Vidor directed "Street Scene," and in a way the film is an extension of his towering 1928 film "The Crowd." "Street Scene" is also about urban alienation -- in this case, an alienation that the characters experience even as they live cheek to jowl in a crowded apartment building.

After the characters are introduced, we move to the next morning. Sam sits on the front stoop reading a book. There's a music lesson being conducted in one of the apartments. Two marshals are there to evict one of the residents. Mr. Maurrant has just left to go out of the town, and Mrs. Maurrant has just pulled down the shades to entertain her gentleman friend. Here's the beautifully paced scene:

Rose has been at her boss's funeral, and when she gets back to the block she knows something's wrong. Within a few hours her mother has become today's tabloid headline:

Then it's time for Rose to say goodbye -- Sam wants to come with her, but he isn't mature enough yet, and she knows that:

"Street Scene" is based upon Elmer Rice's Pulitzer Prize-winning play, and he also wrote the screenplay. The film's heightened realism doesn't seem quite as daring or as incendiary as it probably was in 1931. But the proof is in the pudding -- you've seen a lot of movies and TV shows like "Street Scene" since 1931.