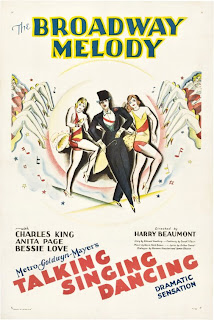 Star-struck sisters coming to New York, struggling songwriter, backstage drama, misguided love -- it's all there, and more, in the 1929 film "The Broadway Melody." It's like a cliche incubator. It also has those awkward little touches we love in early talkies -- hammy acting, stilted silences and a musical soundtrack that makes it sound like the orchestra's in the bathroom.

To the concrete canyons of Broadway, where there's a broken light for every heart, or something like that, come the something-something sisters, Queenie (Anita Page) and Hank (Bessie Love). Queenie is blonde and stauesque, if you know what I mean and I think you do, and Hank is a little pepperpot of personality. ("I'm gonna lay that dame like a roll of linoleum," she says of a rival at one point.)

Hank's boyfriend Eddie (Charles King) has just joined the Zanfield Follies, and he's promised Hank that she and Queenie can join the show. We first meet Eddie at the Ye Olde Gleason Music Publishing Company, overseen by character actor James Gleason, who also co-wrote the dialogue. Eddie has just put the finishing touches on the movie's title song:

Eddie and the girls are reunited, and since he hasn't seen Queenie since she was a little princess, he's surprised, to put it mildly, that she's grown so tall -- and stuff.

Meanwhile, there is backstage drama aplenty. Queenie and Hank get jobs in the chorus, and Queenie ends up as the main visual attraction, if you know what I mean and I think you do, in a big production number. There she attracts the attention of oily rich guy Jacques (Kenneth Thomson), who, in a bid at regular-guy status, signs his calling card "Jock." Queenie is attracted to Eddie, but out of loyalty to her sister she starts hanging with Jock.

Time out for some backstage banter:

Gay designer on his outlandish costumes: I design the costumes for the show, not the doors to the theatre.

Chorus girl: I know that -- if you had, they'd be painted in lavender.

Then it's time for the big-time production of "Broadway Melody":

Hank is mystified by Queenie's behavior. Eddie, mixing his metaphors, says, "I guess the bright lights just got under her skin." Then Queenie and Eddie have an awkward scene all their own:


There's a lot to like in "Broadway Melody," and if you don't like you can pass the time by counting how many times Queenie and Hank undress and slip into skimpy costumes and/or underwear. We also see them performing their vaudeville act, "Two Harmony Babies From Melody Lane," which includes the line "We can do more with a vo-de-oh-doh/Than Mr. Rockefeller can do with his dough."

When it's all said and done, Hank realizes that Queenie loves Eddie, and she steps out of the picture. At the movie's end, she's ready to go on a vaudeville tour with a new partner, and with the advice of her stuttering agent (Jed Prouty):


Here are the complete credits, if you know what I mean, and I think you do.