"The Big House," or Slammer Time 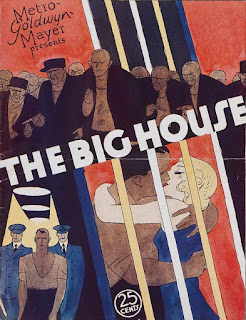 In the 1930 film "The Big House" people are constantly dwarfed by their surroundings. The prison where most of the story takes place is full of high walls and towers but it's also claustrophobic, crammed with sweaty prisoners sleeping three to a cell and filling the courtyard like a swarm of ants.


We first see the prison from the viewpoint of a new prisoner, Kent (Robert Montgomery). The paddy wagon that transports him to the gates is overwhelmed by the structure itself in a striking opening shot:

Once he enters, Kent is systematically reduced from a normal guy to just another convict -- they're givin' him a number and takin' way his name.

Kent is there because he's been found guilty of being a standoffish prig -- oh, and also of killing some guy in a drunken car accident. His cellmates are Butch (Wallace Beery at his Wallace Beery-ist, full of childlike bluster and yet handy with a machine gun) and Morgan (Chester Morris). They urge Kent not to hang out with the prison stool pigeon -- he's the only convict who's wearing a necktie -- but Kent hopes that he can trade inside information for a reduced sentence.

"The Big House" is full of scenes that have become prison movie cliches, showing up in films from "White Heat" to "Birdman of Alcatraz" to "The Shawshank Redemption." One of the best is the mess hall riot, not just because of Beery's violent protest of the dehumanizing effects of prison, but because of the silence -- and the hopeless panorama of convict faces -- leading up to it: 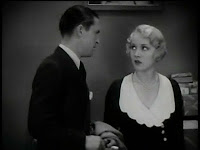 Beery's character is punished for the riot by being sent to "the dungeon," but before he goes he passes his knife to Kent. Then, during a surprise search, Kent slips the knife into Morgan's jacket. As a result, Morgan, a day away from parole, also gets sent to the dungeon. After his 30-day stretch of living in darkness, Morgan fakes illness and escapes through the infirmary. While on the outside, he seeks out and falls in love with Kent's sister (Leila Hyams), and she with him. But it isn't long before Morgan is nabbed and sent back to stir.

While Morgan's been out, Butch has been planning a massive escape to take place on Thanksgiving Day, while the place is low on guards. In a witty scene taking place that morning, all the convicts end up at a church service, singing "Open the Gates (of the Temple)." Then as they all kneel in prayer, Berry starts passing guns and bullets down the row to his fellow escapees.

Morgan refuses to be involved in the break, but he won't rat on Butch, either. That task falls to Kent. When the escape turns into a standoff between the convicts and the guards, Butch blames Morgan. But he finally figures out the truth. Meanwhile, Kent seems to be melting into a puddle of sweat:

Kent is killed in the riot, and Morgan is forced to shoot Butch. But Butch forgives him just before he dies. "The Big House" ends with a focus on Morgan, who's given an early release for his role in stopping the escape and saving a guard's life. The "decent" prisoner, Kent, is revealed as a coward and a stool pigeon, and Morgan effectively takes the place of Kent within the family.

"The Big House" won an Oscar for screenwriter Frances Marion, who adapted the script from Lennox Robinson's play. It was smoothly directed by George Hill, Marion's husband at the time. It represented a career-saving role for Beery, who got the role as a result of the death of Lon Chaney, Sr., who passed away after making only one talkie, "The Unholy Three."