"Bombshell," or Harlow Can You Go? 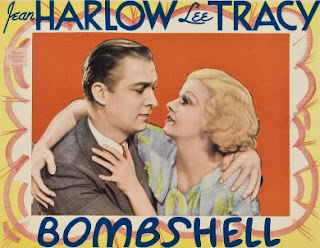 Burns is the name, Lola Burns, and any resemblance to Jean Harlow is purely intentional. She's platinum blonde, she's an international sex symbol and she's the star of "Red Dust." She lives in a gorgeous Hollywood mansion along with her sponging father and brother (Frank Morgan and Ted Healy), a wisecracking maid (Louise Beavers) and faithful assistant (Una Merkel).

At the studio, Burns is hounded by a persistent stalker and by fast-talking, fast-thinking studio publicity man "Space" Hanlon, played by Lee "Aw, sugar, you got me all wrong" Tracy:


"Bombshell" moves as fast as Tracy talks. At any given moment in any given frame of this movie, someone is leaving, coming in or passing by. The dialogue is just as fast and funny, as when Space is justifying what he's done for Lola:

"I've seen to it that Lola Burns is a family slogan from Kokomo, Indiana to the Khyber Pass! Strong man take one look at your picture and go home and kiss their wives for the first time in ten years! You're an international tonic! You're a boon to re-population in a world thinned out by war and famine!"

There's also great dialogue involving Beavers as Harlow's maid. In one scene she tells Harlow that the negligee Harlow gave her was "torn." "Your day off is sure brutal on your lingerie," Harlow says. And when Merkel, as Harlow's assistant, tries to bully Beavers, she responds, "Don't scald me with your steam, woman. I know where the bodies are buried!" 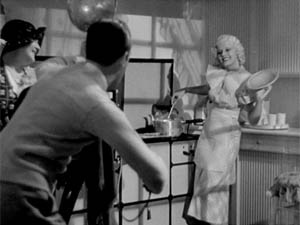 "Bombshell" also has great footage of the real-life MGM lot and surrounding buildings -- how many liaisons, you wonder, began at Ryan's Cafe just outside the studio gate? And it has a healthy sense of humor about Hollywood, spoofing fan magazines, gigolos with phony royal titles and stars adopting babies because it makes good copy. When Burns expresses an interest in adopting, Space stops her short -- "You think I want my bombshell turned into a rubber nipple?"

The movie ends with a "His Girl Friday"-style twist -- Burns runs away from the studio to a dude ranch and starts to worry if the studio really misses her. She also falls for a rich young man (Franchot Tone) who seems perfect -- too perfect.

As much as "Bombshell" lampoons the studio system, however, it's interesting that two of the male leads -- Tracy and Healy -- would go on to violate system rules and end up in big trouble. In 1934, MGM suspended Tracy for his drunken hi-jinks on the Mexican set of "Viva Villa," and his career was never the same. And Healy died in 1937 under suspicious circumstances -- at least one book contends that he was beaten to death by a group including MGM star Wallace Beery, and that MGM sent Beery out of the country until the hubbub died down.

You can find complete credits for "Bombshell" here.