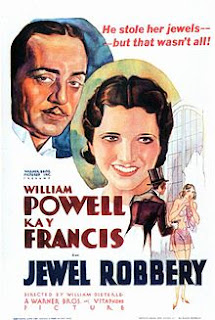 I have been raised in a cynical age, so expressions of sincerity don't come easily to me. On the one hand, I am a firm believer in what Lily Tomlin once said: "No matter how cynical you get, it's never enough to keep up." On the other, when I come across something that's genuinely delightful, I have to make it clear that I really, honest to goodness, mean "genuinely delightful."

It really IS straight-up delightful -- light comedy and sly satire that's practically on the Lubitsch level, placed there largely through the efforts of William Powell and Kay Francis, who would finish this film and go immediately into Lubitsch's immortal "Trouble in Paradise."

True, "Jewel Robbery" isn't perfect. Lousy title, for one thing -- it's so prosaic, it's like calling "The Thin Man" "Drunk Detective." And there's a plot point involving marijuana that's daring for its time, but that degenerates into dumb visual comedy.

Amazingly, this is a Warner Bros. picture -- from a studio where the "Lower East Side" backlot got much more of a workout than the "European" backlot. We are in Vienna -- real Lubitsch territory -- under the direction of William, nee Wilhelm, Dieterle. Francis is a bored baroness, married to Franz (poor Henry Kolker, almost always in roles where he is very rich and very cuckolded). The highlight of her day is choosing expensive jewelry and letting Franz pay for it. She has just put on her latest purchase, the 28-carat Excelsior Diamond, when a man enters the store:

The Baroness is struck by the thoughtful thief -- even while he steals her precious new diamond. "As I watched him go about his work so simply I realized what a high civilization we have in Europe today," she tells a friend (Helen Vinson).

Powell shows Francis his collection of jewels, including one spectacular necklace:

Francis: Oh, they're too heavenly! This necklace--where did you get it?
Powell: At a charity ball.
Francis: What courage!
Powell: No, merely nimble fingers. The lady stood beside me. The Prince of Wales was announced. I could have removed her dress.

All the while, the police are in hot pursuit of our man Powell, but if you think he gets caught then you haven't seen many pre-code movies. He makes his getaway, and the Baroness shows every indication of going with him, without a care or concern about what -- or who -- she's leaving behind. Francis's final gesture to the camera, where she breaks the fourth wall between the actors and the audience, is, well, delightful -- in a totally non-cynical way.