"Gabriel Over the White House," or the Fascist and the Furious 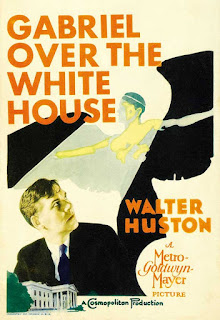 In 1930, Walter Huston played Abraham Lincoln in D.W. Griffith's biographical film, and three years later he played the President again in "Gabriel Over the White House," based on a best-selling novel of the day written anonymously.

Huston plays President Judson Hammond, and at the beginning, to paraphrase another real-life president, he's much more of a Ford than a Lincoln. He's a Warren Harding-like party hack who's packed the cabinet with all his political cronies. Sure, he's a good uncle to nephew Jimmy (Dickie Moore), who's always hanging around the office, and he commands the respect of secretary Pendie Molloy (Karen Morley) and chief aide Harley "Beek" Beekman (Franchot Tone), but he shows every sign of being a complete George W. -- er, mediocrity in office.

But desperate times call for desperate plot twists, and divine providence intervenes when the President is seriously hurt in an auto accident (he himself was driving, pushing the speedometer above 90). He's in a coma, and something strange happens:


The President Hammond who emerges from the coma is a haunted, schizoid zombie!

No, not really, but he is a much more forceful fellow who's driven to do the right thing, no matter who he offends. The old Hammond wouldn't meet with Bronson (David Landau), the leader of the unemployed, but after Bronson is killed Hammond bravely goes to the massive camp of marchers and proposes a "construction army" to put them back to work.

Next Hammond takes on prohibition and the gangsters who prosper from it, particularly Nick Diamond (C. Henry Gordon, whose hawk-like looks suggest an evil Fred Astaire). Hammond even invites Diamond to his office for a face-to-face meeting, but when they can't come to terms and a government liquor store is bombed, Hammond forms a "police army" and puts Tone in charge of catching the bad guys, judging their criminal trial and overseeing the firing squad in the shadow of the Statue of Liberty!:


Finally, Hammond tackles the problem of foreign debt by gathering representatives of debtor countries on a battleship and destroying two empty ships to demonstrate -- well, his point escaped me, but it worked, and everyone pledges to pay up pronto.

Having fixed all of America's problems unilaterally, without the bother of Congress or the constitution, Hammond's health starts to falter. Is this the end of his heavenly prolonged life?

Casting the U.S. President as Mister Fix-It is always an appealing idea, particularly when the country is in the kind of crisis it was in the early 1930s. The unemployed marchers are based on the real-life Bonus Army, of course, who demanded early payment of cash benefits they were promised at the end of World War I; President Herbert Hoover responded by sending an opposition army with General Douglas MacArthur in charge and setting their camps on fire. And the "construction army" that Hammond proposes is eerily similar to the kind of government programs put in place by President Franklin Roosevelt.