"Dancing Lady" and the Crawford Stomp 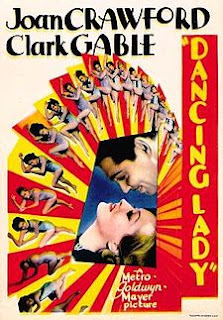 Robert Osborne, the urbane host of Turner Classic Movies, never ever badmouths a movie or a star. He might struggle to find something nice to say about the Bowery Boys in "Dig That Uranium," but he'd find it.

That's why it's so interesting to watch him describe Joan Crawford's dancing ability (spoiler alert: she doesn't have any). He raises an eyebrow and his eyes glaze for a second and he uses euphemisms like "energetic" and "unique." "She's very game," he says, and you wonder if he isn't dying to add, "... like a moose."

So let's get this straight -- dancing did not come naturally to Joan Crawford. The irony is that, over at Warner Bros., Ruby "Leadfoot" Keeler wasn't much better, but she was making one musical after another and stomping her way across America's aorta.

Still, for the most part I come to praise Crawford, not to bury her. The 1933 film "Dancing Lady" was her only out-and-out musical, and it has a lot to recommend it. It has a supporting cast that includes everyone from Clark Gable to the Three Stooges, and the screenplay by Allen Rivkin and P.J. Wolfson is filled with the same kind of backstage wisecracking and racy dialogue you'll find in "42nd Street." In several interesting ways, however, "Dancing Lady" comes up short when compared to that classic.

Crawford plays Janie Barlow, who lives to dance and vice versa. She's hoofing in the chorus of a burlesque show when she catches the eye of playboy Tod Newton (Franchot Tone), who's out slumming with his friends. When the show is raided, Tod bails Janie out of jail and tries to help her get a job on Broadway, in a new show directed by Patch Gallagher (Gable). Patch resents Janie getting special treatment, but she wins him over with her gunk and spumtion -- er, spunk and gumption. For instance, take this scene in Patch's workout room:


Let's also add that Crawford is flat out gorgeous in this movie. Her eyes could dance, at least.

And Gable is easily her match. It's fun to watch them verbally spar -- it's even funnier when they do it while the Three Stooges, as stagehands, are doing their "spread out" routine in the background:


"Dancing Lady" also was the debut film of Fred Astaire, who plays a featured dancer named, um, Fred Astaire. (Hey, nobody knew who he was at that point!) When Crawford partners with Astaire, it isn't pretty -- one floats like a butterfly, and the other lumbers like a caterpillar with gout.

The musical numbers in "Dancing Lady" occur toward the end, and this is really where "42nd Street" leaves the movie in the dust. "42nd Street" had songs like "Young and Healthy," "Shuffle Off to Buffalo" and the title song. Sure, the songs were given outrageously imaginative stagings by Busby Berkeley, but they were good songs to begin with, snappy and wittily written. In "Dancing Lady," by contrast, we have the mundane "Dancing Lady" and "Let's Go Bavarian," with lyrics that include the lines "Here in Bavaria/They take good care of ya." There's nothing like a German number to bring a show to a grinding halt. These numbers aren't just bad imitations, they're anti-Berkeley -- they try to do with scale alone what Berkeley did with scale and imagination. Get a load of the ending to "Let's Go Bavarian":


Foam in your face! Aaaaah!

The final number, "Rhythm of the Day," shows a bit more imagination, but by then you're looking for the exit even if you're sitting in your living room. Finally, after the show is proven a success, Crawford confronts Gable. She's broken up with Tone, and she's gonna be a star. Oh, and they love each other.

Gable: What it is this you're dishing out?

Crawford: Can't you take it? (They kiss.)

Here's a preview from "Dancing Lady":