"Ladies They Talk About," or The Old Cell Game 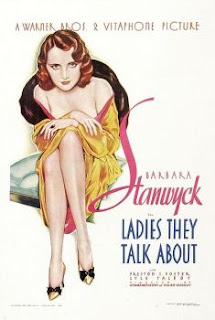 It's not news to proclaim Barbara Stanwyck as one of the screen's greatest actresses, and it's practically impossible to dislike her once you learn of her casual, profane attitude on the set, or her preference for directors like Preston Sturges and Billy Wilder, or that fact she had an affair with Robert Wagner when he was in his 20s and she was in her 40s (he says they did, anyway).

By all accounts, she was rigorously professional in front of the camera, and pretty down to earth otherwise. She did comedy as well as she did drama, and had enough of a sense of humor about herself that she made numerous guest appearances on "The Jack Benny Program." Stanwyck grew up in Brooklyn, in poverty, and came to Hollywood with her husband, vaudeville comic Frank Fay -- in true "A Star Is Born" fashion, his career faded as hers flowered.

The 1933 film "Ladies They Talk About" finds Stanwyck still learning her craft. She had already made a couple of movies with Frank Capra and the first film version of the best-selling novel "So Big," but still there are moments in this film when she seems uncomfortable. Then, in others, she's startlingly self assured.

Stanwyck plays Nan Martin, a gangster's moll who gets caught when the gang pulls a bank job and the investigating cop sees through her disguise:

She ends up in jail, but Nan has an admirer -- the anti-crime crusader Dave Slade (Preston Foster). They grew up in the same neighborhood and Slade believes in her innocence. He even talks a skeptical D.A. (Robert McWade) into paroling her:

But for once, Nan thinks of someone else. She knows if her guilt is proven, it'll tarnish Slade's reputation. So she confesses to her role in the robbery. She's sent to San Quentin, and this is where "Ladies They Talk About" kicks into high gear with vivid little set pieces about life in a woman's prison. And Stanwyck has a great sidekick in Linda, played with winning ease by singer Lillian Roth:

(In real life, Roth's career as a singer and stage star was overshadowed by alcoholism, and her biography, "I'll Cry Tomorrow," was made into a 1955 film with Susan Hayward as Roth.)

Meanwhile, back in stir, Nan's only enemy is Susie (Dorothy Burgess), an unbalanced little number who's obsessed with Slade and whose cell is filled with his photos. We see her in one scene that scans a cell block as the prisoners are turning in:

The films builds to a moral dilemma -- will Nan help her male co-robbers escape from a nearby prison? Will she meet Dave Slade for love -- or revenge? One thing's for sure -- in love or war, Stanwyck's a badass.