"Heroes for Sale," or Happy Days Aren't Exactly Here Yet 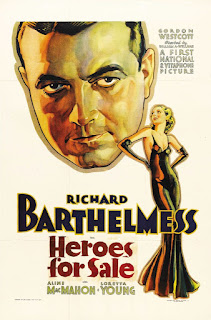 Richard Barthelmess had a face suited to sadness, and as the hero of "Heroes for Sale" (1933), it fits his character perfectly. He's Tom Holmes, a World War I veteran who faces prison, poverty, death, drugs and depression. He ends the movie with his ethics intact, but not much else.

But although "Heroes for Sale" is downbeat, it's also a textbook example of couching social commentary in a well-made, fast-moving story, enhanced by a supporting cast of pros including Aline MacMahon, Robert Barrat and Loretta Young.

We first meet Tom during wartime. He and Roger Winston (pasty-faced Gordon Westcott), who happen to be from the same hometown, are sent on a suicide mission to storm a German machine gun nest. At the crucial moment, Roger freezes and lets Tom go it alone. Tom is shot and Roger thinks he's dead -- then he's hailed as a hero because of Tom's courage. 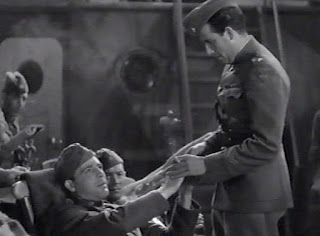 
Back home in Gooberville, Roger gets a hero's welcome at the palatial family manse, while Tom goes back to his mother's bungalow, locks the bedroom door and pops a pain pill. 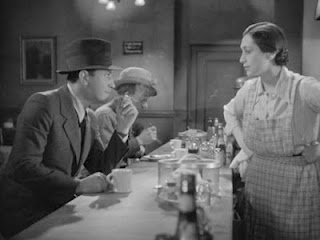 Out of guilt, Roger finagles a job for Tom at the family's bank, but Tom's drug habit gets the better of him and he's sent to rehab. Once he's released, Tom heads for Chicago. There he rents a room where the landlady is good-hearted Mary (MacMahon), who also runs a lunchroom and sees to it that no one is denied a meal. Also renting a room in the same place is Ruth (Young), who Tom likey.

Another tenant is Max (Barrat), a Communist ("When you get to be my age, you'll have a bomb in every pocket") who nonetheless is a whiz with machinery. 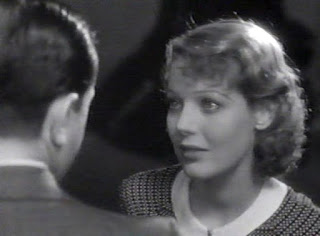 Tom and Ruth begin a romance, and Tom gets a job at the same laundry where Ruth works. He starts as a deliveryman and builds his route up so quickly that the kindly boss gives him a promotion. With the help of Max (Barrat), Tom sells his boss on a new, more efficient laundry system. Max explains his turnabout thusly -- "I despise them (bosses)! I spit on them! But I'm willing to get rich with them."

Tom turns to his co-workers to raise money to finance the new washer prototype, so everyone profits. And he gets the boss to promise that there will be no layoffs as a result of the new machines.

Time flies. Tom and Ruth have a child, prosperity prospers, Max starts wearing spats. Then comes the depression, and kindly laundry boss passes on. The new owners, represented by the weaselly Douglas Dumbrille (Of course!), see no reason to keep such a large laundry staff, and the layoffs begin. An angry mob gathers at Tom's house and they prepare to storm the laundry. Tom tries to stop them, but gets swept up in the mob, as does Ruth, who is killed. Tom is wrongly imprisoned as one of the organizers. Max is still wearing spats. 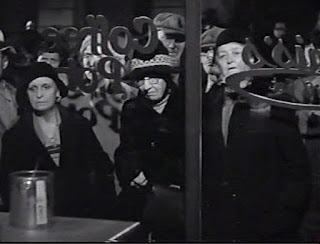 Five years later, Tom is released from prison. He goes back to the lunchroom, where Mary has been raising his son. He's rich -- the laundry system is still making money, and Max has been depositing Tom's share into the bank for him. The depression is in full swing, and to Tom the laundry money is tainted, so he gives it to Mary to help feed the jobless, who are crowding outside the lunchroom window. 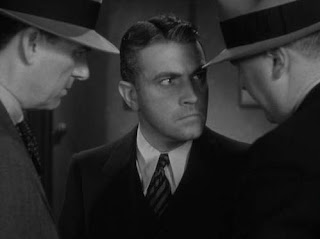 But there's no peace for Tom -- he's been branded as a Communist, and he gets a visit from the police department's "Red Squad." They let him know that his every move will be shadowed as long as he stays in Chicago. 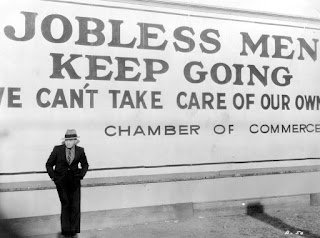 So Tom hits the road, with what seems like all the rest of America. And one rainy night in a Hooverville, he meets a familiar face -- Roger the rat. He's been ruined by the crash, and he's done a little embezzling on his own. Roger remarks that, despite everything, Tom seems oddly optimistic.

"It's not optimism," Tom responds, "just common horse sense. Did you read President Roosevelt's inaugural address? He's right. You know, it takes more than one sock on the jaw to lick 120 million people."

To get technical about it, Tom has gotten more than just one sock on the jaw. And "Heroes for Sale" leaves a lot of questions unanswered. But it at least raises points that not many other Hollywood movies were daring to raise -- and wouldn't be raising again until the 1960s.

Here's the trailer for "Heroes for Sale":