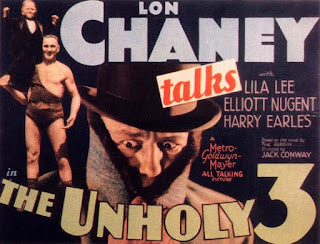 Once upon a time, in a pet shop in a very snowy city around 1930, lived three old friends -- a ventriloquist disguised as an old lady (Lon Chaney), a surly midget disguised as a baby (Harry Earles), and a strongman disguised as, um, a big guy in a suit (Ivan Linov).

They called themselves "The Unholy Three" because they had run away from the circus, where they had done bad things to people, including pocketing watches and lifting wallets. They thought the pet shop would be a perfect place to hide, and no one ever got suspicious, even though they kept a giant ape in the back room. 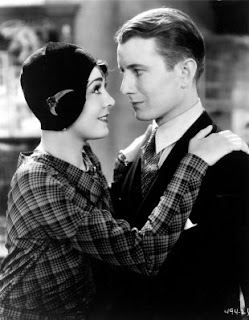 The ventriloquist talked like an old lady, and also supplied the "voices" for the exotic birds she sold. The midget didn't talk much, which is just as well, because he had a heavy accent and everything he said sounded like "Vith ah shirty doo open peasants." The strongman said very little, but was always giving dirty looks to the ape.


Living with the three disguised people was a woman who didn't need any disguise at all. Her name was Rosie (Lila Lee), and she was also from the circus, and she had also stolen things. She acted like her heart was as cold as the snow on the sidewalk, but it was actually melting thanks to Hector (Elliott Nugent), the only person in the store who was not a thief. (Technically, the ape also was not a thief, but he was not on the payroll.)

Hector: It's wonderful the way your grandma can make those birds talk.


The old lady sold many exotic birds to wealthy customers. When the customers took the birds home and found they wouldn't talk, they called the old lady, who again "talked" for them while she/he was casing the joint for a robbery. Then he/she would return to the shop and the unholy three would have a conference:

Old Lady: Listen up, you mugs -- this is a perfect setup.

Strongman: That ape is looking at me. 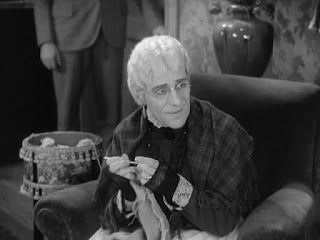 Soon it is Christmas day -- Rosie and Hector have put up a tree, the old lady is knitting and the midget is in baby clothes, smoking a cigar. The newspapers tell of a robbery and murder the night before -- at the very same house where the old lady had been the day before to see a man about a bird!

The police get suspicious, so the unholy three plus two (Rosie and the ape) take it on the lam. They end up in a mountain cabin, and the ape is angry because he wanted to go to the seaside.


Meanwhile, Hector has been framed for the jewel robbery and murder, and is on trial for his very life!

Will Rosie escape? Will the ape get to tangle with his sworn enemy, the strongman? Will the surly midget learn to speak clearly? (No, yes and yes, not in that order.)

Here are the full cast and credits for "The Unholy Three," which incidentally was Lon Chaney's only talking picture.