"What Price Hollywood," or A Star Is Torn 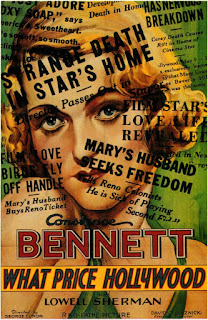 You can't talk about the 1932 film "What Price Hollywood?" without dishing some Hollywood dirt -- that the plot, for instance, was inspired by the real-life marriage of rising star Colleen Moore and producer John McCormick, or that Lowell Sherman based his portrayal of dipsomaniac director Max Carey on his one-time real-life brother-in-law, John Barrymore.

"What Price Hollywood?" benefits from those anchors in reality. True, the rise of Mary Evans (Constance Bennett) from waitress at the Brown Derby to a movie star billed as "America's Pal" is a little too speedy, and studio mogul Julius Saxe (Gregory Ratoff) is a little too fatherly, but the movie doesn't shy away from satirizing and, in some cases, criticizing Hollywood and its star culture.

We begin in a Hollywood apartment where Mary is simultaneously fantasizing and getting ready for work:

(Didja know that the trademark for the short-lived RKO-Pathe partnership was a giant rooster standing in Iceland?)

Anyway, at the restaurant Mary waits on brilliant-but-boiled director Max Carey (Sherman). He's taken with her looks and spunk and invites her to attend a movie premiere with him -- in a broken-down tin lizzy he just bought as a gag. She ends up wangling a small role in Carey's next picture, and after a rough start she makes good. Then she's signed to a long-term contract and becomes "America's Pal."

The relationship between Mary and Carey remains platonic, but nonetheless he's bothered when Mary falls in love with polo-playing Lonnie Borden (Neil Hamilton). Lonnie's kind of a stuffed shirt, but he does love Mary, and he even goes along with it when their wedding is Hollywood-ized by Saxe and his staff. The result plays like something out of "Day of the Locust":


It doesn't take long, however, before Lonnie starts resenting Mary's career and her loyalty to Carey, who's on a fast downhill slide. When Carey shows up at the house drunk in the middle of the night, Lonnie leaves in a huff -- a 1925 two-door Huff, to badly paraphrase Groucho Marx.

But Mary stays true to Carey, even bailing him out of the drunk tank and bringing him home to recover.

Mary: From tonight on, you're going dry.

Max: From tonight on, I won't cause you any more trouble.

Mary exits, and Max gets out of bed. Then, in a striking montage co-created by Soviet great Slavko Vorkapitch, he makes some decisions of his own:

Mary's shock at finding Max's body echoes her first movie bit for Max, where she played a party girl who ends up in the same situation. Nicely done.

Max's suicide at Mary's house triggers rumors of a scandal, and her films are boycotted by "upright" women's groups. Mary's only thought is that Lonnie will now challenge her for custody of their young son, so she escapes to Europe. By the end, however, Mary and Lonnie have reunited and there's talk of a comeback film, because if there's anything Hollywood loves more than a fall from grace it's forgiving the fallen woman (see Bergman, Ingrid).

There are other nice little touches in "What Price Hollywood?," including this exchange between Mary and Saxe about her next film:

Mary: I don't think I should have a baby in every picture I do.

Saxe: This one is different -- you're getting married first!

Ratoff, with his heavy Russian accent, is part parody and part perfect as Saxe -- in one scene he sits at his massive desk and nurses his ulcer with a bowl of crackers and milk. It's interesting to see Eddie Anderson, a few years away from achieving comic fame as Rochester on "The Jack Benny Program," as Carey's non-stereotypical valet, and Neil Hamilton, later Commissioner Gordon on the 1960s TV series version of "Batman," as a romantic lead.

Bennett is fine, but the real person to watch in "What Price Hollywood?" is Sherman. He handles this role with an easy grace, probably because in real life, he was a director as well as an actor (after this film he would direct Mae West in "She Done Him Wrong," followed by Katharine Hepburn in her Oscar-winning role as the star of "Morning Glory.") He would die shortly thereafter, in 1934.


Here is a listing of full cast and credits.