"The Girl Said No," and So Did William Haines 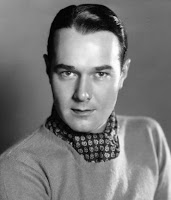 William Haines (1900-73) was one of those movie stars who easily made the transition from silent to sound films. In the late 1920s he was one of MGM's biggest stars -- handsome, athletic and relaxed on screen, with an appealing goofball side.

But he was also gay, and that's why William Haines stopped making movies in 1934. 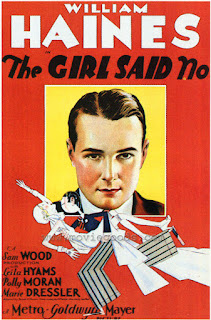 Actually, it was being gay and being involved in a scandal or two that even MGM's ruthless publicity department couldn't cover up -- or maybe they just stopped trying. He was arrested in a YMCA in 1933 after being caught in a compromising position with another man. The story goes that Haines was then ordered into an arranged marriage by studio brass. He refused and ended up leaving MGM. After two films for Mascot Pictures on poverty row, he left the movies altogether.


"The Girl Said No," released in 1930, follows the formula for a Haines picture. When it begins, he's a well-to-do, happy-go-lucky, likably arrogant guy just out of college. The opening scene tells you what you need to know:

Haines plays Tom Ward, who's just graduated. Through a friend, his father has arranged a bank job for Tom, but he's too interested in going out to party with friends. (Lesson from watching too many movies made in the early 1930s -- large open cars really lent themselves to transporting drunken crowds around town.)

While out on the town, Tom spots Mary Howe (Leila Hyams). She's the steady girl of his college rival (Francis X. Bushman) but Tom is smitten by her and becomes downright stalker-y in his pursuit of her. She tries to discourage him. "I get your chill," he says, "But I'll be right there when your fever rises."

When he finds that she works at a brokerage, he tries to get a job there:

True to the Haines film formula, Tom gets the confidence knocked out of him about two-thirds of the way through the picture. There's a family crisis, and Tom becomes the family's primary breadwinner. He's also in charge of keeping up everyone's spirits around the house, including good old mom (Clara Blandick, later Auntie Em in "The Wizard of Oz").

While he's keeping home and hearth together, Tom stops pursuing Mary, but she misses his fun "kidnappings" and the way he sabotaged all her other dates, and she still can't warm up to his rival. He says he loves her, and the best she can do is "I like you like everything."  Tom re-joins the brokerage (he was fired during his cocky days) and is given a tough assignment -- selling a boatload of bonds to the rich and eccentric Hettie Brown (Marie Dressler), modeled after the real-life Molly Brown, of "The Unsinkable Molly Brown" fame.

The scene with Dressler and Haines lasts about ten minutes, and it's vaudeville stuff -- he wants to get her signature on a check, and he's posing as a doctor so she won't throw him out. Then he gives her some alcohol, and Dressler starts chewing the art deco scenery with her drunk act:


Both Haines and Dressler are pros, and the scene -- ad libs included -- flows nicely. The check gets signed and Hettie wants Tom to handle all her financial affairs. Then it's off to foil the wedding of Mary and the rival by (of course) kidnapping and gagging the bride, which she loves, and everything ends happily ever after.

After his film career ended, Haines didn't exactly suffer -- he began an interior design business and many of his clients were the actresses he'd appeared opposite at MGM, including Joan Crawford and Norma Shearer. Nancy and Ronald Reagan were also steadfast clients and friends. Haines was lucky in love, too -- his partner, James Shields, stayed with him for over 40 years and committed suicide a year after Haines died.

If you'd like to learn more about Haines, check out William Mann's book "Wisecracker: The Life and Times of Hollywood's First Openly Gay Star." Highly recommended.

Here are full credits for "The Girl Said No."