"Mystery of the Wax Museum," or Statue of Limitations 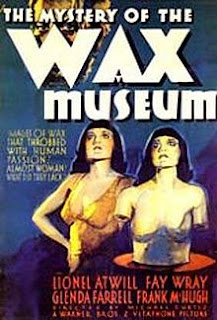 At the heart of 1933's "Mystery of the Wax Museum" are two actresses doing what they did best in 1930s movies -- Glenda Farrell wisecracking and Fay Wray screaming. Farrell, of course, was cast as the heroine's fresh dame best friend in dozens of Warner Bros. pictures, and Wray is best known as King Kong's girlfriend.

In this movie, they're roommates -- Farrell is a reporter trying to prove herself ("I'm gonna make news if I've gotta bite a dog") and Wray is a demure little thing whose boyfriend is a wax sculptor who works for the mysterious Dr. Igor (Lionel Atwill), aka Dr. Bearded McCrazy.

As the movie opens, we learn Dr. Igor's story -- he ran a wax museum in London where his evil partner (Edwin Maxwell) torches the place for the insurance money. This leads to a striking sequence where the museum is destroyed, with echoes of the melting faces from "Raiders of the Lost Ark": 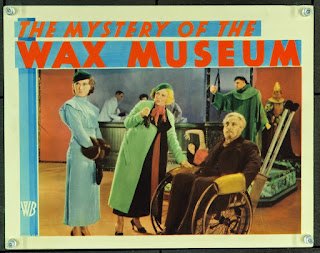 "The Mystery of the Wax Museum" was shot in an early form of technicolor, using two colors as opposed to the later version, which would use three. It looks a little muddy, and the print shown on Turner Classic Movies doesn't help. Still, the process adds an extra element of creepiness, and it also helps that in you can show dummies being stabbed, melted and beheaded as opposed to real people. Of course, in several scenes, the wax dummies are played by humans, and it's fun to try and catch them blinking or breathing. (Okay, not a LOT of fun, but fun.)

Anyway, we move forward ten years. The doctor is wheelchair bound as a result of injuries from the fire and he can no longer sculpt. But he has assistants sculpting for him, and his new museum is just about to open in New York City. Farrell, on the lookout for a story, gets interested when she sees a resemblance between the museum's Joan of Arc statue and a recent murder victim that has vanished from the morgue:

Meanwhile, Dr. McCrazy has his sights on Wray, who looks just like his perfect vision of Marie Antoinette, and therefore must be spirited down to the doctor's ultramodern laboratory, where the centerpiece is a very nicely designed art deco cauldron of boiling wax:


With its expressionistic sets, lurid tableaus and pre-code (wax) violence and nudity, "Mystery of the Wax Museum" is anything but embalmed.