During the first half of the 1930s, Linden toiled at Warner Bros., where he played opposite contract players including James Cagney, Joan Blondell, Loretta Young, Ned Sparks, Lyle Talbot, Humphrey Bogart and Guy Kibbee. Despite all this experience, his voice never changed.


We begin our scholarly analysis with the 1932 film "Big City Blues," Linden's seventh film. Here he is Bud "Bud" Reeves of Hoopersville, Indiana, who has inherited a bit of money and is bound for New York City. While waiting for the train he has a little talk with the philosophical stationmaster (Grant Mitchell): 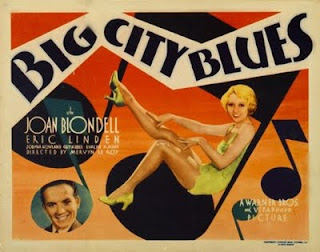 In the city, Bud is greeted by cousin Gibboney (Walter Catlett), a Big Apple chiseler who is rotten to the core. He gladly appropriates Bud's bread and throws a big party. "The boss said you was having ladies over so we put labels on the bottles," says Gibboney's bootlegger.

Gibboney also introduces Bud to chorus girl Vida (Joan Blondell), another small towner who's come to New York. She's a good egg, but almost everyone else at the party is rotten -- they drink the liquor Bud has paid for and a couple of them get plastered, leading to a fight between romantic rivals Lyle Talbot and Humphrey Bogart. In what they used to call the ensuing melee, a girl is accidentally killed and everyone skedaddles. Bud ducks out as well and wanders the city, trying to figure out what to do next.

Bud's journey eventually leads him to a nightclub that Vida mentioned, where he meets Serena (Jobyna Howland), an older woman who's so philosophical she might be the hometown stationmaster in drag:

All's well that ends well, of course -- Bud and Vida are reunited. Bud is cleared of the murder and he hightails it back to Hoopersville, where faithful dog Duke awaits.

Directed by Mervyn LeRoy, whose next film would be the gloriously melodramatic "Three on a Match" and then the classic "I Am a Fugitive from a Chain Gang," "Big City Blues" is slight, short (just over 60 minutes) and, like its hero, a little shaky. 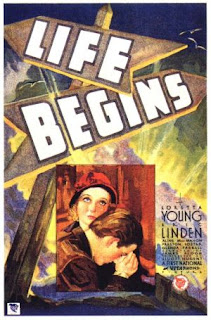 In "Life Begins," also released in 1932, Linden's character's name is Jed, but he's pretty much still Bud, this time as a young father. The setting of "Life Begins" is, of course, a maternity ward, and it's a slice-of-depression-life ensemble drama, similar to Warner films "From Headquarters" and "Union Depot," both released about the same time. Linden is the hero of sorts and Loretta Young, as Linden's wife, is the heroine, but there are also lots of eccentric, incidental characters, played by Warner's stalwarts, who spice up the story line. Frank McHugh, for instance, plays a nervous father with a weakened wife. Will she make it? Glenda Farrell is a saloon singer pregnant with twins who can't wait to give them up for cash. Will she take it? And Aline MacMahon is the head nurse with a heart of gold who's always carrying a sleeping baby. Will she wake it?

There's also a pre-code single mother, a psychotic baby snatcher and a few oafish doctors whose bedside manner consists of saying "there, there" a lot. But the real melodrama is contributed by Young and Linden -- she's serving time for killing a man. He probably tried to sexually assault her, but murder is murder ("Some guys deserve to be killed," Farrell says). Anyway, once the baby is born, Young will head back to prison, so her time in the maternity ward is also the first time husband and wife have been together in months. And he's worried about her health, so he's as exhausted as she is. Linden plays the whole movie as if he's carrying a safe on his back, and his big scene comes at the end, after the baby is born:

By the end of the 1930s, Linden's career consisted in small roles in A pictures, like "Gone with the Wind," and lead roles in B and C pictures such as "Here's Flash Casey" and "Everything's on Ice." He went back to his first love, the theatre, for a while but ended up working as a civil servant in Orange County, California.

Here are the credits for "Big City Blues" and "Life Begins".

And here are the previews for both films: