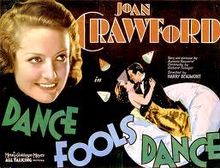 In the early 1930s, MGM boasted that it had under contract "More Stars Than There Are in Heaven," but the movies that we think of as classically MGM -- perfectly pruned packages of gloss and glamour and very little awareness of the outside world -- really didn't come along until the mid-1930s. Of all the Hollywood studios, you get the feeling that MGM was the one place where executives -- particularly grand poobah Louis B. Mayer -- welcomed the motion picture code because its limitations on salty behavior and innuendo dovetailed so beautifully with his idealized vision of American society.

At any rate, the 1931 film "Dance, Fools, Dance" offers an early look at what we might call the MGM effect, as demonstrated by the character played by and the performance given by the heroine, Joan Crawford. At this point, Crawford and Norma Shearer were the co-queens of the MGM lot.

"Dance, Fools, Dance" opens on a yacht. We can tell this is an MGM film as opposed to, say, Warner Bros., because the yacht isn't owned by bootleggers. It's owned by Crawford's wealthy father, and she's on board with her hunky boyfriend, uttering devil-may-care lines like "I believe in -- trying love out." Also on board is a party of carefree, wealthy young people. Because this is a pre-code film, Crawford has a risque suggestion -- let's go swimming in our underwear -- and we see it happen:

Crawford's father is forgiving of his daughter's antics, but he's also grumbling about the volatility of the market, and sure enough, within a scene or two, his big stock crashes, and so does dad. He's cashed in his chips and lies flat on the floor of the stock exchange.

Amazingly, given the number of financial whizzes he must have known, father had no life insurance, so Bonnie (Crawford) and ne'er-do-well brother Rodney (William Bakewell) are flat busted. What to do?

Bonnie: You [could] do what a great many others have done in those circumstances -- go to work.

Bob (Lester Vail), Bonnie's boyfriend from the yacht, the swimmer in his BVDs, comes by and Bonnie hopes he'll sweep her away into wealthy wedlock. But he just makes noises about marriage being "the right thing to do" and love doesn't seem to be involved, so she lets him off the hook. Then she has to stand by and overhear her former friends make fun of her as the furniture is being auctioned off.

It doesn't take long before Rodney "Work? Hah!" Jordan is in over his head. He gets mixed up in a shootout and is warned not to talk. Meanwhile, over at the newspaper, Bonnie is unaware her brother is involved and uses strange facial expressions to convey her interest in covering the story:

Rodney blabs about the shootout to Edwards, who has gone to sniff out the story. The bad guys know Edwards knows, so they shadow him as he heads back to the paper, and Rodney is given an unpleasant assignment:

Crawford then goes undercover at the speakeasy to find out what happened to Edwards, still not knowing her brother was involved. Naturally, she becomes the lead dancer in the floor show, and attracts the attention of Gable. He delivers that never-fail pickup line: "You got me goin', sister."

They go to Gable's apartment, where she picks up a ringing phone and discovers that her brother is on the line, wanting to talk to Gable.

She does not handle it well:


Clearly, Crawford's character is not cut out for undercover work, and that's another way that "Dance, Fools, Dance" demonstrates the MGM effect. The movie is built around its star, and Crawford never misses a chance to break down dramatically over anything that happens.

In the final showdown, brother Rodney and bad guy Gable gun each other down and again, it's all about Crawford. She has dipped her toe into the underworld and can't wait to pull it back out. Rich boyfriend reappears and re-proposes, and she leaves the newspaper. You can't help but compare it with what would've happened in a Warner Bros. movie -- Joan Blondell or Glenda Farrell or Bette Davis would have played Crawford's role in a much more likably cynical manner. When the big reveal comes about her brother being involved with gangsters, they would've reacted, but kept it together, actually making their performance more involving and less showboat-y. And forget about the rich boyfriend -- in the Warner Bros. version, Blondell//Farrell//Davis would've ended up with the paper's handsome star reporter, undoubtedly played by George Brent.

Here's the full cast and crew for "Dance, Fools, Dance."