"Girl Missing": How Glenda Farrell Got Us Through the Great Depression 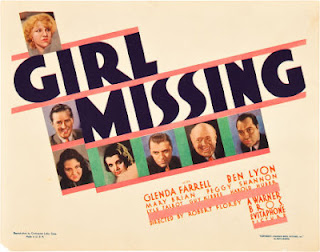 In 1933, Glenda Farrell appeared in 10 movies at Warner Bros. and one at Columbia Pictures -- that's 11 movies in 12 months. In all of them, she pretty much played the same role -- a fast talking, quick thinking, wisecracking, goodhearted dame who was usually the heroine's best friend.

But what Farrell may have lacked in range she made up for in sheer onscreen presence and style -- you always knew what to expect from her, and rarely is she an unwelcome presence in the movies she appears in.


"Girl Missing" is a great example -- she's Kay Curtis, the sidekick of June Dale (Mary Brian). They're chorus girls in between shows who've wangled a trip to a Palm Springs resort with a wealthy dullard (Guy Kibbee). He finally gets wise and leaves them holding the bag, addressing a goodbye note to "The G.D. Sisters." "I don't know if he means gold diggers or another well-known word," Farrell says.

While trying to find a sugar daddy to pay their hotel bill, they encounter a fellow chorus girl who's hiding her identity so she can marry the wealthy Henry Gibson (Ben Lyon).  She gives them the high hat, but when she disappears and a reward is offered, Kay and June smell a rat (played by Lyle Talbot) and set to work.

There isn't a whole lot more to "Girl Missing," but it moves at a swift pace right up to the ending, where Farrell's character wraps everything up in pretty pink ribbons, Talbot is put in the pokey, and Lyon and Brian form a vaudeville act -- not really, but with those names, they should.

"Girl Missing" was released on March 4, 1933, the same day President Franklin Roosevelt was inaugurated and promptly closed the nation's lending institutions for a "holiday" to prevent bank runs. It was, by most accounts, the depth of the Great Depression. Movies like "Girl Missing" and performers like Farrell, and her Warner co-players James Cagney and Edward G. Robinson, to name just two, represented a kind of quintessentially American character -- tough, realistic, good humored, unafraid.