"Altogether she was turbulent, sensible and friendly, and as such she became so agreeable that a number of indifferent or downright poor films couldn't hurt her. She was lightly symbolic of an American type, unspoiled and sporty." -- Ethan Mordden on Carole Lombard 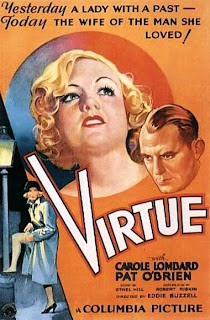 The 1932 film "Virtue" is only a so-so showcase for Carole Lombard. She did her best work in comedies, where she could showcase her sexy goofiness and horsey laugh. Here she is more somber, as a prostitute named Mae. At the beginning of the film she is being escorted by the law out of New York City, placed on a train going to Danbury, Connecticut. But she gets off at 125th street before the train leaves town and makes her way back to the flat of a friend, Lil (Mayo Methot).

Lil: Danbury. That's where they make hats, isn't it?

On her way back to Lil's, Mae hailed a cab driven by Jimmy (Pat O'Brien) and stiffed him on the fare. But to show him (and us) that she's on the square, she finds him and pays him back:

Mae gets a job in a restaurant, and she and Jimmy become an item, but she's hesitant to tell him of her past. He finds out the hard way -- on their wedding night, when the cop who escorted Mae out of town shows up on her doorstep. He leaves in a fury, then cools down and they start life together. 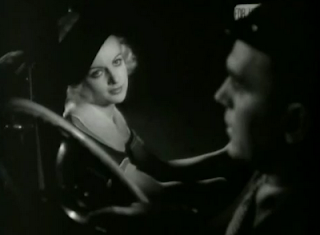 Jimmy's a donut-dunking regular guy who's saving up to buy a gas station, and things are going swell until an old friend, Gert (Shirley Grey), shows up. She gives Mae a hard-luck story and chisels $200 out of her from Jimmy's savings. Of course, the deal for the gas station comes through the next day, and Mae scrambles to get the money back, visiting Gert in the hotel where she once took her customers. Jimmy sees her there and immediately suspects she's back to her old ways.

The plot complication could be solved with two minutes of conversation, but then you wouldn't have a movie. And to further complicate things, Mae is wrongly accused of a murder committed by Lil's no-good boyfriend (Jack LaRue).

How much you like "Virtue" depends a lot on how much you like Lombard. Unlike contemporaries such as Claudette Colbert or Joan Crawford, Lombard doesn't fall back on prim mannerisms, and unlike Jean Harlow, she doesn't push her sex appeal right into your face. She's refreshingly goofy when she needs to be, and downright sexy in everyday clothes -- check out her dress in the scene above. Robert Riskin's script is full of funny wisecracks and a nicely done dramatic moment where Lil's boyfriend gets his comeuppance, and there are nice supporting turns by Ward Bond as O'Brien's pal and by Methot as Lil (at the time, she was married to Humphrey Bogart, and Hollywood legend says they fought -- sometimes physically -- all the time).

The final scene offers a nice chance to see a goofy Lombard: