"Peach-O-Reno," or May Divorce Be With You 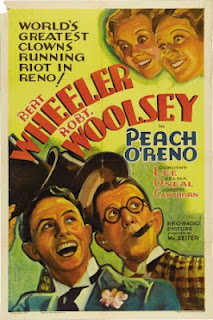 In 1929, Bert Wheeler and Robert Woolsey came west to RKO Pictures to appear in the film version of "Rio Rita," in which they had appeared on Broadway. They stayed in Hollywood and made movies, mostly for RKO, until Woolsey died in 1938.

By the time they appeared in the 1931 film "Peach-O-Reno," the boys had appeared in nine films together with mostly the same formula -- they were usually comical con men trying to outwit the law or other authorities while making time with the frails (Dorothy Lee often played Wheeler's romantic interest). Woolsey wore goggly-looking eyeglasses and smoked a stogie; Wheeler did more athletic comedy and was a better singer-dancer. If the team suffered in comparison to the Marx Brothers (And who wouldn't?), they were still popular at the box office.

In "Peach-O-Reno," Wheeler and Woolsey play divorce attorneys Wattles and Swift, the sharpest shysters in the biggest little city in the world.

Woolsey (to clerk): File these letters in alphabetical order, and then burn them.

They have a bus that meets prospective divorcees at the train station and brings them to the office, where young women dressed in bellhop costumes escort clients from one attorney to the other. Then, at night, a change comes over the office, and the young women:

The lawyers take on the divorce case of Joe and Aggie Bruno (Joseph Cawthorn and Cora Witherspoon), with Wheeler representing one and Woolsey representing the other. Then their grown daughters arrive -- Pansy (Zelma O'Neal) and Prudence (Lee). They hope to reconcile their parents, and they catch the boys' eye:

Woolsey: Are you married?

Pansy: No, we just look worn out on account of the trip. 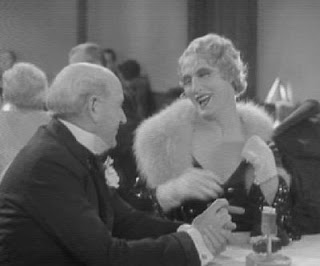 To provide grounds for the Brunos' divorce, Wheeler dresses as a woman and poses as Mr. Bruno's date. Which, of course, gives Wheeler and Woolsey a chance to parody a dance team.

Woolsey: I promised the folks we would render them a number.

When Mrs. Bruno finds out the boys are handling both sides of the case, she gets angry:

Mrs. Bruno (to Woolsey): There you are! How can you look me in the face?

Woolsey: I'm just getting used to it, I suppose.

The Bruno divorce goes to trial:

Woolsey (to Bruno): How long have you been married?

Woolsey: Then you weren't always round-shouldered.

Then the Brunos reunite, and love fills the courtroom:

After Woolsey's death, Wheeler made a few B-movies and did a vaudeville tour in the 1940s with Dorothy Lee. Then in 1955, he played Smokey Joe on the CBS western series "Brave Eagle." He died in 1968.

Here is a full cast and credits listing for "Peach-O-Reno."