"Baby Face," or The Pubic Enemy

Saint Louis woman with her diamond rings
Pulls that man around by her apron strings.
'Twant for powder and for store-bought hair,
The man I love would not gone nowhere, nowhere. 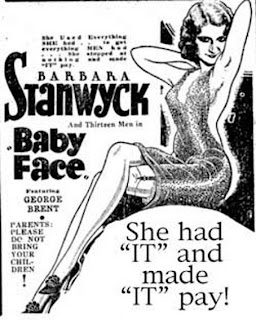 The 1933 film "Baby Face" opens to the strains of "St. Louis Blues," and the song keeps popping up on the soundtrack as it chronicles the rise of Lily Powers (Barbara Stanwyck), who leaves a squalid Pennsylvania steel town and uses her womanly charms to seduce and abandon a series of men at the giant bank where she works, moving up the executive ladder with each conquest.

Lily Powers uses sex like Tom Powers (James Cagney) uses violence in "The Public Enemy," and "St. Louis Blues" follows her around the way "I'm Forever Blowing Bubbles" follows Cagney in that film, from his days as the neighborhood bully to his rise as a gangster, until he ends up perched in the family doorway at the end of the movie, murdered by a rival gang and trussed up like a badly-wrapped mummy.

We first see Lily in her hometown, working for her father (Robert Barrat), who runs a speakeasy for the steel workers:

Her father isn't above selling his daughter in exchange for "protection" from the local hoods, but fortunately he meets a suitable end when he's killed in a still explosion. After his funeral, Lily visits one of her few friends, Cragg (Alphonse Ethier), who introduces her to Nietzsche and has a few words of wisdom for her:

Lily decides to follow Cragg's advice to use men to get da tings you vant, and she and her friend Chico (Theresa Harris) hop a freight out of town:


By the way, the brakeman Lily seduces in that scene is James Murray, the star of King Vidor's legendary "The Crowd." He was playing bit roles at this point in his career, including a role as a blind World War I veteran in "Heroes for Sale."

In New York City, Lily gets a job at the bank, where she has the darndest way of moving up, even though it means she spurns suitors like a young John Wayne:

Lily keeps taking care of business, if you know what I mean and I think you do, until a relationship with one executive (Donald Woods, who played Cagney's brother in "The Public Enemy") ends in a murder-suicide.  To avoid scandal, and to prevent Lily from selling her story to the newspapers, she is transferred by the new bank president (George Brent) to the Paris office. And darned if he doesn't end up in Paris a few months later to visit the bank, and a romance develops. What Lily sees as just another business transaction turns into much more because of that old debbil, love. But her feelings are put to the test when her wealthy man gets into a legal scrape and suddenly needs her financial help. Will she let loose of her ill-gotten gains, or will she look for another ladder to climb?

"Baby Face" is arguably the ultimate pre-code movie. It has everything -- prostitution, infidelity, spicy dialogue and punchy performances. And if you don't agree, then you tell Stanwyck. I'm scared of her.

Here's the full cast listing from "Baby Face," and a preview: