"Flying Down to Rio" and the Power of Intimate Dance 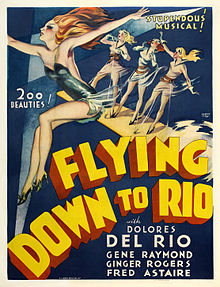 Fred Astaire made his film debut in 1933's "Dancing Lady" as a dancer named, um, Fred Astaire. Preceding that film there had been a screen test where the evaluator wrote these infamous words: "Can't act. Slightly bald. Can dance a little."

In his second film, 1933's "Flying Down to Rio," Astaire has worked his way up to a fictional last name -- he's Fred Ayres, musician and best friend to dashing bandleader Roger Bond (Gene Raymond). The dominant storyline of the movie is a romance between Roger and the fair Belinha (Dolores Del Rio), even though she has been promised in wedlock to Roger's best friend (Raul Roulien).

But in film and dance history, of course, the importance of "Flying Down to Rio" has very little to do with that plot -- it has to do with the pairing of Astaire and Ginger Rogers as a sensual, elegant, in-sync dance team. 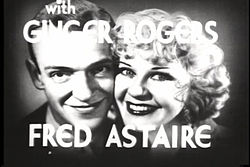 By the time she appeared in "Flying Down to Rio," Rogers had already appeared in two huge musical hits for Warner Bros. -- "42nd Street" and "Gold Diggers of 1933" -- that contained elaborate production numbers choreographed by Busby Berkeley. But she really hadn't been a featured dancer in either film -- in fact, in "42nd Street" her character is chosen to replace the tempramental star (Bebe Daniels), but Rogers steps aside to give the role to the endearing, leadfooted Ruby Keeler in a star-making turn.

So even though Rogers was the better known of the Astaire-Rogers pair, she really hadn't had a chance to show her dancing chops onscreen.

Here Rogers is the band's singer, Honey Hale, and she and Astaire aren't romantic partners, at least not overtly -- they just like to dance together, and "The Carioca" is the first opportunity they get to strut their stuff:

And in one other scene, Astaire does some freestyle stuff, and the actors look like they actually are enjoying it, not just pretending:

Astaire comes to this movie fully formed -- of course, he had been a star on Broadway, so his dancing style was established. And his distinctive style of dress is already evident -- button-down collar, tie tucked into his pants, contrasting belt, two-toned shoes to make sure we're looking where we're supposed to be looking.

The finale of the film is the fabled "girls on biplanes" number, and even though it's clearly shot in the studio, it still has the ability to make your palms clammy:

The big finish is a nod to the tremendously successful Warner musicals, but what makes "Flying Down to Rio" unique is that it -- and other Astaire-Rogers musicals -- is an anti-Warner's musical. The power comes not from spectacle but from a couple, dancing with and playing off of each other. That's what makes their performances together timeless.

Here are the full film credits, and here's the trailer: