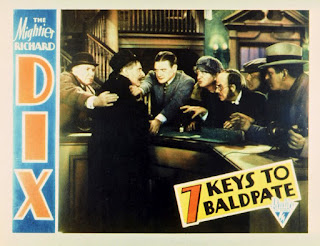 Based on George M. Cohan's 1913 play, which itself was based on a novel by Earl Derr Biggers, the man who also gave us Charlie Chan, the 1929 film version of "Seven Keys to Baldpate" takes place in what one character calls "the loneliest spot on earth -- a summer resort in the winter."

To this spot comes William Halliwell Magee (Richard Dix), a best-selling novelist out to win a bet that only gets betted (?) in movies like this -- a rich friend, the owner of Baldpate, will pay McGee $5,000 if he can write a 10,000-word story in 24 hours. (Kind-of-interesting sidelight -- when Cohan played the role on Broadway and in the 1917 film, his character was named George Washington Magee.)

Magee accepts the bet, and his friend says he hopes the book won't be about the usual stuff Magee writes about -- ghosts, stolen money, shots in the night, falling in love at first sight. At this point, of course, Magee meets Mary (Miriam Seeger):


Like most early talkies, there are awkward moments (See what I did there?) in "Seven Keys to Baldpate." Because most of the film takes place on one set -- the two-level lobby of the resort -- it lends itself to staginess, and most of the cast members perform with exaggerated gestures and hammy line readings (this is the kind of movie where Mary is called "meh-dee") that actors utilized before modern, economic sound film acting was introduced by people like James Cagney and Paul Muni.

And the first third of the film, in particular, is glacially paced -- although considering global warming, maybe that's too much of a compliment. When Magee gets to Baldpate, he has to endure what seems like a half hour of expository dialogue with the caretaker and his wife:


Once Magee starts writing his story, the loneliest place in the world suddenly seems like Grand Central Station. Visitors include the mayor, the president of the local railroad, the president's wife, a couple of guys bribing the mayor for the railroad president, and a hermit named Pete, and Mary.

Dix, a husky fellow who usually played humorless heroic types, does at least get to do some comedy:


Here are the complete credits for "Seven Keys to Baldpate."