"If I Had a Million," or A Taste of Money 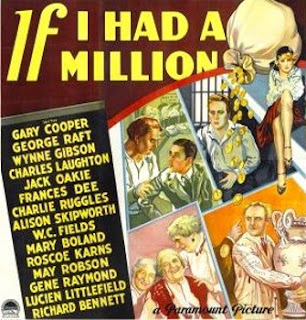 In the 1932 film "If I Had a Million," a cantankerous millionaire (Richard Bennett, the real-life father of actresses Constance and Joan Bennett) decides to stiff his greedy relatives and leave a million dollars to eight people picked at random from the city directory.

It was a big year for "all-star" films. MGM released three -- "Grand Hotel," "Dinner at Eight" and "Night Flight." And Paramount's entry into the sweepstakes included a cast of studio contract players ranging from W.C. Fields to a young Gary Cooper.

But for my money, the best segments are the comedies, directed by Ernst Lubitsch and Norman Z. McLeod.

Lubitsch's segment, with Charles Laughton as a clerk who quits his job by giving the big boss a well-earned raspberry, is short and sweet.

Then there's the segment with Charlie Ruggles as the put-upon clerk in a china shop. He's been reluctantly promoted from the accounting department, and he keeps breaking the merchandise, which is subtracted from his salary. At home he is henpecked by wife Mary Boland, at her Mary Boland-iest. This leads to nightmares:

Once Ruggles gets his million, he gleefully destroys the store. And the film's other outstanding segment also features generous destruction. W.C. Fields and Alison Skipworth play a couple who use their million to finance a crusade against road hogs (bonus -- lots of cool footage of the Southern California landscape circa 1932):

Finally, there's a good look at a young Gary Cooper in the segment where he, Jack Oakie and Roscoe Karns play roughneck Marines who think the check is a joke: