The Mae Clarke Film Festival: "The Good Bad Girl" and "The Final Edition" 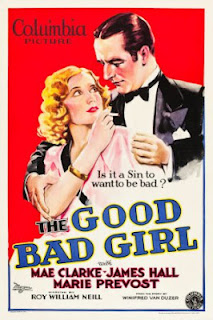 Clarke's kisser was a pretty one, and deserved -- and got -- better than a grapefruit half in most of her movies. She had the good fortune to appear in several true film classics, including "The Public Enemy," "Frankenstein," the first version of "Waterloo Bridge" and the original version of "The Front Page." She was capable of convincing work, but in average movies headed by average directors she tends to deliver her lines as if she was thinking about something else.

In the 1931 film "The Good Bad Girl" she gets to dip her toe into soap opera -- a territory dominated at the time by the likes of Kay Francis and Norma Shearer. She is Marcia, a reluctant gangster's moll. As the movie opens, she is trying to leave the big lug, but as Neil Sedaka so memorably said, breaking up is hard to do. Or, as the gangster (Robert Ellis) says, "There's only one way for either of us -- feet first," which does not have much of a danceable beat. Then the gangster leaves to settle a score with an old rival, which he does in kind of a memorable way:

The gangster wants Marcia to give him a fake alibi, but she refuses. She has fallen in love with another man (James Hall). The gangster is imprisoned and swears vengeance, and Marcia marries the other man even though he doesn't know about her past. When he and his high-society family find out, she is shunned, even though she's with child. Marcia has the baby, and the gangster escapes from prison, intent on tracking down and killing her. He makes it as far as the baby's nursery, where the police shoot him down like a dog. At the same time, rich husband has come to his senses and sets out to reconcile with Marcia.

"The Good Bad Girl" gives Clarke several opportunities to do some heavy-duty emoting, and she is convincing as the young mother set adrift. As Marcia's boozy pal, silent-film beauty Marie Prevost is aces with comedy relief, and things chug along until the inevitable happy ending:

In 1932's "The Final Edition," Clarke is reporter Ann Woodman, and the first part of her last name describes her performance. When she acts sassy or makes with a wisecrack, it's almost as if she doesn't understand it's a joke. Someone like Glenda Farrell would be knocking these lines out of the park, you get me?

Anyway, Ann wants to be a reporter but boyfriend Bradshaw (Pat O'Brien), who's also the city editor, doesn't think she's up to the job. Ann gets her chance when the new police commissioner is murdered and she jumps in to console the man's wife:

She scoops the competition with details about the murder and then she follows the killer to a resort hotel where he's hiding out. The bad guys catch on and she and Bradshaw end up in hot water, at least temporarily:

The newspaper picture was a stock-in-trade at Warner Bros., where O'Brien was under contract, so he fits right in, talking a mile a minute. For instance, try to decipher what he's saying here:

As for Clarke, her career continued into the 1960s, but with smaller and smaller roles. Her other credits include "Singin' in the Rain" (as a hairdresser), "The Catered Affair" (as a saleswoman) and "Pat and Mike" (as a golfer).

Here are full credits for "The Good Bad Girl" and "The Final Edition."