"The Beast of the City," or Bang, Bang 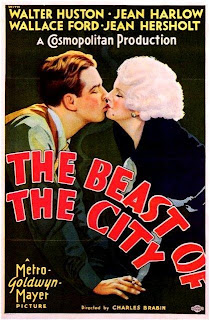 The 1932 film "The Beast of the City" opens with a long-winded bit of argle-bargle from President Herbert Hoover to the effect of, dude, if movies glamorize gangsters all the time, how about a movie that glamorizes the cops instead?

Louis B. Mayer, the head honcho of MGM, was a big Hoover supporter, and slapping that statement at the beginning of "The Beast of the City" gives it a kind of moral authority and civic veneer, which is funny because the movie -- especially its no-holds-barred ending -- is every bit as violent as the popular gangster films of the day. The film's scriptwriters are W.R. Burnett (creator of "Little Caesar") and John Lee Mahin (co-writer of "Scarface"). The movie is also an impressive showcase for a young Jean Harlow, and gives us an early glimpse of Mickey Rooney.

Our hero is police Captain Jim Fitzpatrick, played stolidly by Walter Huston. Jim is stern, unsmiling and uncorruptable, but he's constantly foiled in his efforts to put gangster Sam Belmonte (Jean Hersholt) behind bars because of Belmonte's lawyers and their knowledge of "rights."

Fitzpatrick is also a solid family man, with a devoted wife, twin daughters and a rambunctious son played by Rooney, billed here as Mickey Mcguire. (Amazing that a guy who was in a movie made 80 years ago is still with us.)  Rooney is around mostly for comic relief:

Because his crusade against Belmonte is making the corrupt chief look bad, Fitzpatrick is transferred to a safer, rural district. There he foils a bank holdup and gets wounded in the process, becoming a hero. This results in his promotion to Chief, a job he tackles with the same grimness of purpose.

Meanwhile, Fitzpatrick's brother Ed (Wallace Ford) poses a problem. He's also a cop, but not as conscientious as Jim, and to make matters worse he falls for Belmonte's moll, Daisy (Harlow):

As Jim's anti-corruption crusade gains strength, Ed falls further from grace. Finally, he's arrested for his involvement in a robbery/murder. But because of threats from Belmonte's thugs and fast work by his attorneys, Ed is acquitted. He begs his brother's forgiveness, but only one thing can set things straight -- Ed joins Jim (and about 25 other cops) in a shootout with Belmonte's gang that's positively operatic in its body count:

Weird choice for a closing theme, eh? And don't forget the message -- courtroom justice is all well and good, but the best way to deal with criminals is to ambush and kill them before they kill you.

Here are the full credits for "The Beast of the City."