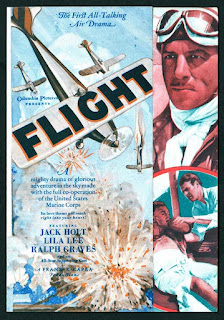 In his 1929 film "Flight," Frank Capra demonstrates a skill that would take other directors a few more years to accomplish -- he makes an early talkie movie filled with action.

While keeping the sound quality high and the performances natural.

To understand how different "Flight" is from its contemporaries, consider the entries in our "Awkward Early Talkie Theatre" category -- stagy, immobile, filled with overacting and arched reading of dialogue.

"Flight," by contrast, boasts an easy assurance and striking locations, most notably a naval base at San Diego that poses as Pensacola. 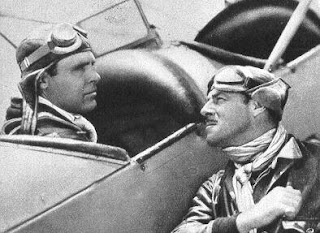 This was the second of three films that Capra would direct with Jack Holt and Ralph Graves -- the first was 1928's "Submarine" and the last would be 1931's "Dirigible." These movies were the "Top Gun" of their day, filled with the latest in military equipment and technology.

Beyond the flashiness, though, the movies worked because of the rapport between Holt and Graves -- a macho camaraderie that also included moments of startling vulnerability.

In "Flight," Graves (who is also credited with the story) is Lefty Phelps. In the opening moments of the film, his college football team is playing in the Rose Bowl, giving Capra the chance to include lots of real-life game footage. Lefty isn't a team star, but the coach puts him in for one last crucial play -- one that Lefty screws up by running in the opposite direction and scoring a winning touchdown for the other team.

After the game, as Lefty is hiding out in the men's room, he has a brief tussle with Panama Williams (Holt), a Marine sergeant. He accuses Lefty of intentionally throwing the game. Lefty heatedly denies it. Panama, seeing that Lefty is genuinely hurt and scared, apologizes.

We fast forward a few weeks, and Lefty has joined the Marines -- maybe because of Panama's considerate behavior, or maybe because of the snazzy recruiting poster he saw in the men's room. Anyway, Lefty is trying to keep his identity secret, but when it comes out, he confides again in Panama, and shows him a particularly harsh newspaper article:

Certainly Holt and Graves have their moments of roughhousing and swaggering, but their relationship is unexpectedly warm. Capra seems to let them ad lib some of their dialogue, which leads to a "damn" or "hell" getting slipped in now and then.

Despite the help of Panama, Lefty washes out as a Marine pilot. He watches dejectedly as his fellow Marines get their wings:

But Panama has a plan -- he'll keep Lefty around as his mechanic.

Meanwhile, there is some romantic tension in the form of nurse Elinor (Lila Lee). Panama is crazy about her, but she only has eyes for Lefty. Lefty feels the same way, but he keeps Elinor at arm's length out of loyalty to Panama. This leads him to leave camp and get stinking, only to be rescued by Panama:

Elinor confesses to Panama that she loves Lefty just as the Marines, who by now are in Nicaragua, have to leave to fight a group of bandits. The pilot Lefty is riding with makes a crash landing, leaving Panama to set out on a dangerous rescue mission.

Certainly "Flight" fits a pattern that action/adventure movies use to this day -- heroes/friends quarrel and then unite against a common enemy at the end. And Lefty gets his confidence back by becoming a hero in dire circumstances. But this is a particularly well-done example -- all the more striking, and un-awkward, considering its age.