"Union Depot" and the Warner Regulars 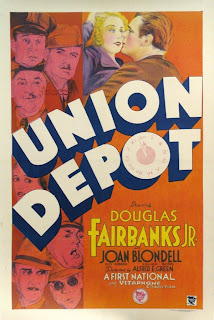 In their underrated 1978 film "Movie Movie" director Stanley Donen and screenwriters Larry Gelbart and Sheldon Keller paid homage to the 1930s movies they loved as kids. To do this, Gelbart and Keller wrote two 45-minute movies -- one a black-and-white boxing film, the other a musical in color -- so that "Movie Movie" took the form of a double feature. More importantly, as in the 1930s when studios had stock companies -- players under contract -- it was a double feature with the same actors (including Art Carney, George C. Scott, Eli Wallach, Red Buttons and Trish Van Devere), but in different roles. The movie even had a preview of coming attractions -- a World War I movie ("War at its best!") with all the same actors as the other two movies.

In 1932's "Union Depot" we get to see a good chunk of the Warner stock company from the early 1930s, including Frank McHugh, Guy Kibbee, Alan Hale and David Landau. They all have business of one sort or another within the majestic marble structure where people are coming and going while announcements of train departures bounce off the walls. The movie opens with a tracking/crane shot to show you the whole enchilada:

More than other Hollywood studios, Warner Bros. had a uniquely working-class viewpoint, and in this movie it's expressed by the fact that the station is teeming with immigrants, from Eastern Europeans -- as seen above -- to Asians:

Our hero is Chic (pronounced "chick," not "cheek"), played by Douglas Fairbanks, Jr. He and his sidekick, Scratch (Kibbee), have just been released from the local hoosegow on a vagrancy charge, and they're looking to raise a few bucks. Chic gets lucky when he "inherits" a suit from a drunken traveler (McHugh, doing one of his specialties) with money in the pocket. He buys himself dinner, and then he sees a forlorn-looking Ruth (Joan Blondell) on a bench. She's a chorus girl who broke her ankle; now she's recovered, but the show has moved on without her, and she needs money to catch a train to Salt Lake City, where she can get her job back. At the same time, Scratch has come across a claim check. Chic redeems it, and gets a violin case -- filled with money! 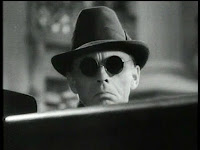 Meanwhile, the guy who belongs to the case (Hale) is trying to get it back, and he'll get tough if he has to, see? And Ruth is trying to escape the clutches of a creepy old guy (see creep at right) who developed the hots for her during her recovery. And the money turns out to be counterfeit, and Chic is arrested by the feds, leading to a pretty cool chase through the train yards as he tries to capture the real bad guy, Hale:

And one thing's for sure -- if you didn't like the Warner regulars in these roles, you'd be seeing them in something different within a few weeks. In 1932 McHugh appeared in eight films -- he played a mechanic in "The Crowd Roars," a frantic new father in "Life Begins" and a wisecracking reporter in "Blessed Event," among others. Kibbee was just as busy, going from a drunk hobo here to a corrupt cop in "Big City Blues" to a bartender in "The Mouthpiece" to James Cagney's father in "The Crowd Roars."

Here are the full credits for "Union Depot."